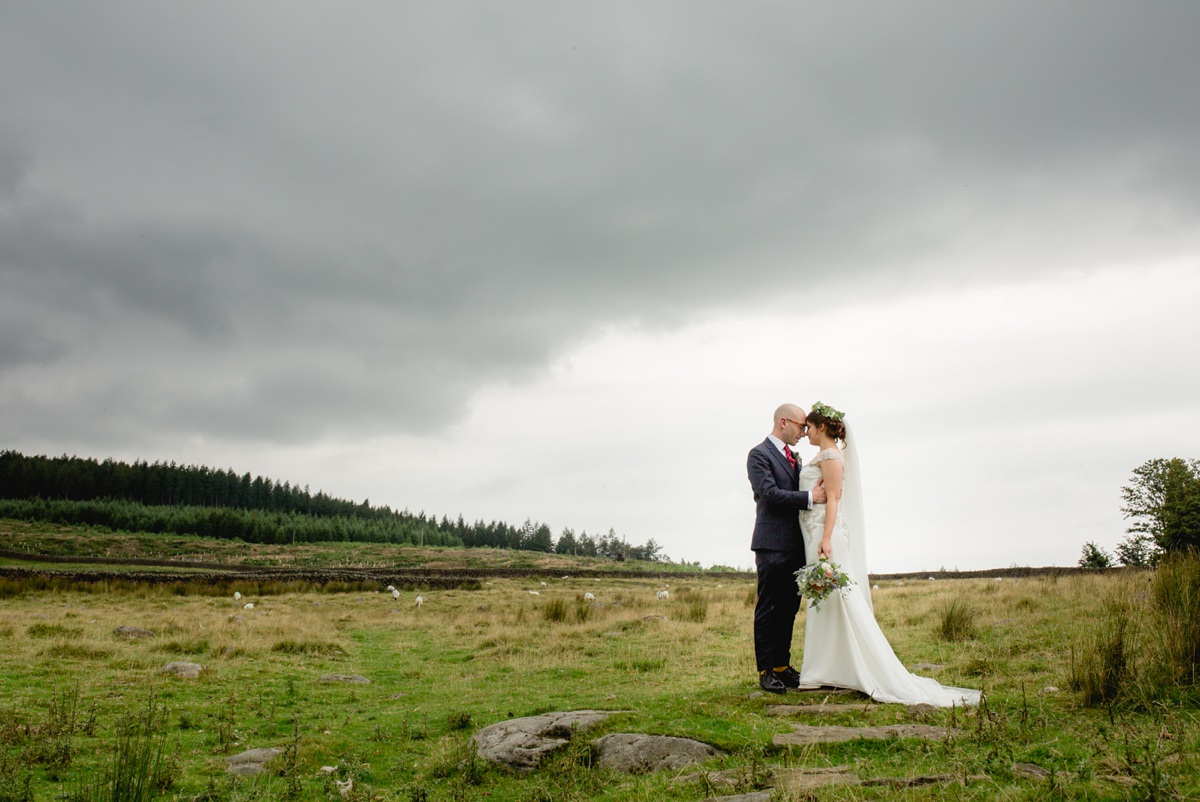 I’m looking back to Daisy and Alex’s laidback wedding at Burnsall Village Hall. What a day it was! For me, the day started by heading over to capture some preparation images at Daisy and Alex’s home. It’s always good to arrive a relaxed atmosphere, the girls were digging into a glass of bubbles and a brew, while Carys was putting the finishing touches to hair and make up for the day. It was also a perfect opportunity to get a shot of those stunning flowers from Pear Tree House Flowers. As time progressed Daisy’s parents arrived and it was time to get ready. Daisy’s Dad in a stylish suit and Pork Pie hat combo, and Mum with an ace gold and black print dress. Daisy opted for an Enzoani Harlem dress which she picked out over at the Harrogate Wedding Lounge. Suiting the beading on the dress was the eucalyptus flower crown. I love photographing the moment all friends and family see a bride for the first time and this was no exception; Daisy was welcomed into the lounge with tears, smiles and plenty of hugs.

The ceremony was held just down the road at the All Saints Church in the centre of Ilkley. A beautiful church and a lovely relaxed vicar. It’s always good to capture the arrival of the bride and see everyone’s reactions. Choosing to go with traditional vows and two readings it was a lovely service. After the ceremony, the couple were welcomed down the confetti tunnel, and it turns out we had just missed the rain. We captured a few quick photos before jumping into the VW Beetle and driving over to Burnsall Village hall. Along the way, we pulled in and captured a few portraits of the wonderful Yorkshire landscape just as the rain was coming in. Unfortunately not long after it started chucking it down, but when has that ever stopped wedding fun!

Daisy and Alex were welcomed to the Village Hall by their friends and family and the local ginger cat, which was certainly happy to see them both, and took it as an excuse to head into the Hall to explore. Burnsall Village Hall had been decorated the day before by Daisy, Alex and their friends and looked stunning, plenty of lovely details, eucalyptus table runners, paper pom poms, rustic and fresh flowers spread around, naked cake (made by Daisy’s Step-mum), and plenty of fairy lights. The food was a large family style buffet with plenty to soak up all the champagne, gin and beer they had put on the self-service bar.

As the evening progressed we popped outside for a few quick portraits, and to let them have a little bit of time together, and a few details especially Alex’s navy checked Reiss suit, Dr Martins with mustard sock combo which looked spot on. By then it was time for the party to get started. After the first dance all the guests took over the dance floor and some epic shapes got thrown, we even had the guest appearances of two Boston Terriers!

Thank you to Daisy and Alex for having me to document their wedding day and these kind (which I borrowed from their Love my Dress feature).

“Where do we start about Mark?  He was awesome.  From the moment we met up with him to speak about our feelings and ideas about how we wished our wedding photos to look he nailed it.  He put us at ease instantly, putting any concerns we had about being in front of the camera to rest. On the day he not only took masterful photos that we will cherish forever he also managed to put everyone at ease and even went as far as helping the day to run smoothly.”